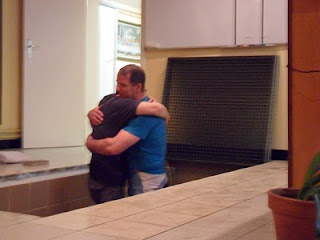 Welcome our new brother, Rob Kok, to the family of God. Rob is the identical twin brother of our Peter Kok. For years he has been considering his life with God and wondering what he wants to do. He grew up in a strict Dutch Reformed home, but both he and his brother rebelled against this faith, although both have said they never felt they completely left God.

Peter has been part of our family here in Maastricht and in those years Rob’s life continued in the north of the country, closer to the place he grew up. But the brothers have never really been far apart, and it is certainly due to Peter’s life and stuggles, questions and discussion with his brother that Rob thought more and more about giving his life to Jesus. So when he came by recently, while visiting Peter (who lives in our street), it was to talk about if it was possible to be baptized.

It was during the Christmas break. Stephan had gone down to Peter’s house to say hello and Rob was visiting. Rob talked with Stephan about it who suggested that Rob should “just go talk to my dad.” So he did. And this last weekend Rob drove all the way down to us here (about a 3 hour drive) so that he could share his new birth with us and with his brother.

It has always thrilled me to see how the Holy Spirit works in people’s lives. Rob has had many people influence him in this choice to live now totally for Jesus. His brother, the memory of things his father said and did, talks with us during visits, and even Stephan on a simple visit. The Good Shepherd is always out doing all he can to find the lost sheep and get them home. I am so glad that I can be part of that.

Where do you go?

Next week we will deal with a great problem, once again. Someone we know, who has been struggling with his life and now knows that he wants Jesus to run things, has asked to be baptized. He wants to give his life completely to Jesus, to die and be born again. We are so thankful for the grace that Jesus continues to show!


This man will come down to our area, since he doesn’t have a congregation where he is. As so many times before, we are looking for some practical ways to deal with his death, burial and resurrection. You see, our building doesn’t have a baptistry. I know that we are not the only ones who deal with this “problem”. I remember seeing pictures of soldiers in the desert, crowds lining up for a muddy pool in India or Africa, and have myself been part of baptizing people in freezing waters. 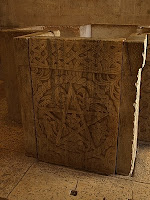 The where doesn’t matter. As long as you can find water to bury someone in, you are going to be fine. I used to look for deeper waters which were long enough for tall people (the Dutch are some of the tallest people in the world). Then I remember seeing a baptistry in Croatia that was basically a cylinder in which the person being baptized could stand. When he bent his knees, he would sit in the water, which would of course go over his head. This was what some of the first baptistries were like.

Who doesn’t matter either. I mean, who is doing the baptising. The apostle Paul even makes the point that he did not baptise many personally. And further, we are seldom told who does the baptising. It’s just not important.

So on Saturday we will look for a place to bury this man’s sins and welcome his new creation into the body that is Christ’s. We have a blow-up pool which we could fill in our kitchen/livingroom. We could go to a local lake. We have friends who have an outdoor swimming pool. The one thing we do not lack in Belgium is plenty of water! So, no matter what, we will rejoice!

What kind of baptisms have you seen?