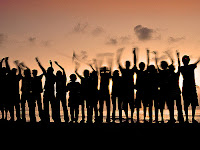 This past weekend I saw signs of "May the 4th be with you." And sombrero's and more for "cinco de Mayo". In the Netherlands the 4th and 5th of May are special. They say: On the 4th we remember; on the 5th we celebrate. The 4th of May is to remember the soldiers who gave their lives in World War II to make the country free. The 5th of May is a celebration of Liberation Day - the day the country was freed from occupation.
On the 4th we were together with church members during our first Friday singing day - together with members from the French-speaking church in Liege. At 8pm we spent a moment of silence (two minutes) and we thought about those who had gone before us, fighting the good fight of faith. Then we sang of the liberation brought to us through the death, burial and resurrection of Jesus Christ. We are free!

I thought about several people who have been influential in my growth and life as a child of God. Here in Maastricht we recently said "See you soon" to our sister, Willemien. She and her husband were two of the first visitors to the church when we arrived in Maastricht. Willemien was a grandmother to our boys and to many in the congregation. Our sister, Roos, was taken by cancer in the early years of our time here in Maastricht. She was not only a part of our team, but I had known her in my years as an apprentice in Haarlem, 10 years before. We look forward to singing with these two women soon.
But then my thoughts went on to the family members in the congregations who support us. My father in the faith, Ron, who taught me so much, well before I was a child of God. Or the elders from 11th and Willis in Abilene who were our first experience as a married couple and what they meant to our lives in Christ together: Dub, Neil and others.
In each of the cities we visit when we go on Home Assignment, we always have a place to stay. In Minnesota that was first always with Susan, who also helped establish a wonderful, loving family. In California it was Wanda who often made sure things were organised. Both sisters went Home quite unexpectedly.
But it is the celebration that reminds us that we will see them all again. We will sing the new song (and even if it IS a new song, we will all know it) as we gloriously celebrate the Lamb and His victory. So we know, even now, that we are liberated. We are made free. We are made new. And we live as people who know that we do not belong here, but we will bring the liberation of the King here. That is why these and many other of our brothers and sisters have taught us.
Remember. Celebrate.

All these people were still living by faith when they died. They did not receive the things promised; they only saw them and welcomed them from a distance, admitting that they were foreigners and strangers on earth. People who say such things show that they are looking for a country of their own. If they had been thinking of the country they had left, they would have had opportunity to return. Instead, they were longing for a better country—a heavenly one. Therefore God is not ashamed to be called their God, for he has prepared a city for them.  Hebrews 11:13-16