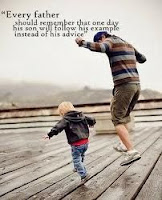 Good examples are indispensable for growth. When you are learning things, watching someone do it right, and having them teach you, is the best way of assimilating what you want to learn.
This past week was Missions Emphasis Week at South 11th and Willis church of Christ in Abilene, Texas. This congregation has been ‘doing’ missions for the 65 years they have been at this address. I don’t know about all of those years, but I can remember all of the examples we saw.
We arrived in Abilene on a Saturday and attended Willis the next morning. That Sunday we were asked out to lunch by at least two couples (if not more). We were taken on a driving tour of some nice areas of Abilene before being taken to a lovely meal. And it wasn’t even because we were such a wonderful new married couple (we had been married that very day before). It’s just how the family at Willis is.
When we arrived, the congregation had already supported a mission effort in the Northeast for a longer period. They were already active in missions in Africa and with the deaf. And they took care of their members and their neighborhood. They had young members who had done short-term evangelism in New Guinea, Africa, and Europe – and they continued to support them.
What does it teach you when you see a congregation set their budget in such a way as to make sure that they can continue supporting missions all over the world? And they are not picky. What I mean is – it is easy for a congregation to get focused on one area of the world. It makes a bit of sense, since the congregation can then gain a deeper knowledge of that area of the world. But Willis has always had a principle of supporting the person. They support their own members who are called to serve – no matter where they are called to serve.
I remember seeing funds raised in a special contribution – because it was needed. Above and beyond the budget. This could be for a chair for those sitting with a loved one through the night, for clothes for those who had less, or a missions need. When there was a need – voiced by any of the members to the family – all looked for a way to help.
In our own situation we were offered a place to stay, had a car loan co-signed (we didn’t have any relatives to help), and found jobs because of these family members who continually focus on the heart of Christ. I don’t know how many of these brothers and sisters specifically thought about their example, but they indisputably formed us through their example.
When one of the members started a Bible study in the neighborhood he asked for any members who wanted to join them in the effort – but he was quite clear: only come if you are willing to be active in sharing your faith. “If you aren’t telling people about Jesus now and here, what makes you think you will do it anywhere else?” That was a good question.
When we started getting ready to come to the Netherlands and Belgium, Willis was right there beside us. And they have remained there all along. But in the typical fashion and example we learned from them they have continued on. Besides supporting us in Europe, this congregation continues to have efforts in Africa, with the deaf (both local and overseas) and within the refugee community locally.
That was something I learned a long time ago from this family: the job is never done and it is not always about doing big things. Sometimes it is just about taking someone home for a good lunch.
We are so thankful for this congregation and all that God continues to do through them.


We always thank God, the Father of our Lord Jesus Christ, when we pray for you, because we have heard of your faith in Christ Jesus and the love you have for all God’s people – the faith and love that spring from the hope stored up for you in heaven and about which you have already heard in the true message of the gospel that has come to you. Colossians 1:3-5
Posted by The Raabs at 3:54 PM No comments:

Sing and be Happy 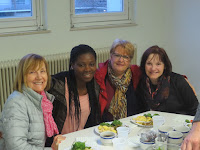 You have heard me say it before, but I’ll say it again – I am so thankful for what God has given us in song! Singing brings heart and mind together. When we sing together, we bring our hearts and minds together. What a blessing and encouragement!
In March we organised the second Song Workshop in Antwerp – time to learn new songs for any congregation, to learn how to read music, to learn the bass line or other part from a specific song. It was a great day of encouraging singing and hopefully preparation for more in many local congregations.
On some Monday’s Shirley and I get to visit with Mario and Tonia in Aarschot for a study. Often we will finish the evening in song – no matter how late it has gotten. And on the first Wednesday of every month we welcome some members from the church in Liege for an evening of singing (often in three languages). This month Mavis Antwi was able to come as well. She is from Scotland, but is doing an internship in Heerlen (outside Maastricht) and made sure to be active with us for the three months she is in the Netherlands.
In May we are organising a concert with Harding University Chorus. Harding will sing with two local choirs and Laus (a group of Dutch-speaking church members) for a varied group in a church building that has been turned into a home and laboratory for blood studies (wonderful symbolism there!). Be praying for the singers, the listeners and all hearts involved, that they will be touched with the words and heart of God.

Whatever your heart is – lift it up with God in song. Are you alone? Sing it out (even if it is only in your heart). Better yet – get together with others and share those hearts and minds in glorifying and extolling our gracious Father.


Is anyone among you in trouble? Let them pray. Is anyone happy? Let them sing songs of praise. James 5:13

Check out a few pictures here.
Posted by The Raabs at 10:17 PM No comments:

Out of the dark

How do you deal with forgiveness? What do we do with the struggle against sin in our lives? Who do you think you are – are you holier than I?
These and many other questions are part and parcel of our conversations and interactions – not only in our work, but in our daily lives with one another as well. Paul struggled with his past, knowing that he had condoned murder – even though he had not considered it such at the time. Peter knew what he had done there by the fire, cursing his accent from Galilee. We all know the feeling: we were in a dark place, a very dark place.
But that is the operative word – if we are now in Christ. We WERE in a very dark place. A place of shame. And when satan reminds us of it – either in temptation or in accusing us through the mouth of someone who has come to know of our past – we can only admit that it is true. We were truly like that. We really did do that. And yet, that is not the end of the story.
It is truly true that Jesus’ death on a cross, in shame and pain, paid my debt to righteousness. “God made him who had no sin to be sin so that we might become his righteousness” (a favorite song and of course also 2 Corinthians 5:21). You may have lived in the darkest depths of slavery (yes, that is really what it is), but He brought you out and placed you in His glorious kingdom of light.
Imagine what the Israelites felt when they came through the Red Sea on dry land and saw the waters crash back down on the army that had been breathing with heated breath down their necks. They had almost been caught again, captured and carried back to the darkness. But now, now they look back over the waves at that far away place, that place of darkness – as they stand in the light, as they stand in freedom.
I am NOT in darkness. I am NEW. And I will live as this risen creation, awoken to new possibilities and new strengths in the might of the Almighty God, my loving Father. You, too, can walk away from darkness. Don’t listen to the repeating refrain of shame that satan shouts into your ear. Simply admit the truth: Yes, I WAS in darkness. And admit the Truth: but ‘I have been crucified in Christ, nevertheless I live. Yet not I, but Christ liveth in me!’ (another song – and Galatians 2:20).

And that is what some of you were. But you were washed, you were sanctified, you were justified in the name of the Lord Jesus Christ and by the Spirit of our God. 1 Corinthians 6:11
Posted by The Raabs at 5:19 PM No comments: