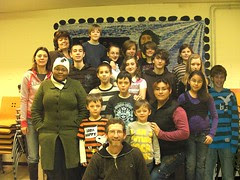 The group
Originally uploaded by sraabs.
The youth weekend in Eindhoven was titled "How to survive with/without "thingy". The last bit was a play on words (which almost works in English) showing how much we need Jesus and don't need "things". This weekend is spent helping us put into practice what we learn about sharing. We head into the city to buy gifts to put in shoeboxes to send to kids who usually don't get any presents.

The interesting thing for us is that this is held on the weekend that Sinterklaas (Saint Nicholas) arrives in the Netherlands. For some he arrives on a boat from Spain (didn't you know that?) - and so will arrive in the harbor (in Rotterdam for example), but he also arrives on his horse. He is surrounded by his helpers. In this case there was a whole band of "black Petes".

After getting everything in the boxes and making them look special, we spent some time thinking about what was really important to us. Jesus says: Your heart will be where your treasure is. What are we really holding as our treasure. I was extremely encouraged by these young people and their desire to share and learn.
Posted by The Raabs at 4:56 PM 1 comment: 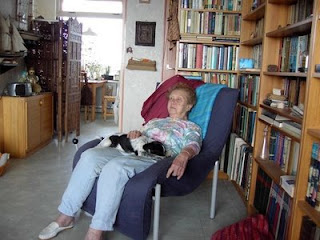 MacRooney was the runt of the litter. But that was perhaps why Willemien loved him and wanted him. He was full of fun and life, jumping and catching (he could throw a ball in the air and catch it - all by himself), beating your legs with his wagging tail. Willemien wasn't even sure she wanted another dog. Her experiences with Bartelo had not been good. And Willemien is no stranger to dogs.
The day Willemien was born she was given a dog - a big bouvier. Since then she has always had dogs, even though she actually liked cats better. When she was married to Cor, they had dogs - first a collie, then various sorts of hunting dogs. Bartelo was the last of that line, taking over the house when Cor passed away, making life difficult for Willemien because he missed his master and decided that he needed to be master in the house.
When Bartelo got sick and needed to be put down, Willemien was not planning on getting another dog. She had had enough. But MacRooney (Rooney for short) stole her heart. And they were so good for each other. Rooney probably would not have lived if Willemien had not chosen him. No one wanted the others in the litter and they were put down. And to be honest, Willemien definitely wouldn't have done as well without Rooney.
The last three days Rooney has been at the vet. Willemien barely got outside (she usually walks Rooney 3-4 times a day). When she called today, I could hear that it was not good news. Rooney had developed a kind of meningitis - an inflammation in his brain, perhaps caused by a hernia which had gotten worse in the last days. He was already blind. Willemien didn't want to see him in any more pain and allowed him to go to sleep. MacRooney was only five years old.
For anyone without a dog, this may all seem quite trivial. But these two helped each other live. Please consider Willemien in your prayers. She is doing well, although the sorrow hits in waves. We sat and looked at possible new dogs - she knows that she really needs to find a help (and one she can help) fairly soon. So we look forward to seeing who will choose her soon.
Posted by The Raabs at 9:29 PM 2 comments:

What a beautiful couple 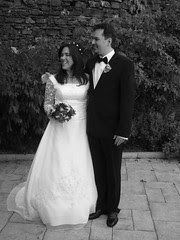 What a beautiful couple
Originally uploaded by smileyneel.
For those of you who know Tonia and Mario, you can see some pictures of their wedding (from Karen Neel's site - thanks Karen!).
Posted by The Raabs at 4:29 PM 1 comment: